As set out in the Foundation’s mission statement, the essence of our activities is granting scholarships to women who choose to go to school in order to improve their quality of life. Accordingly, since 1994, the Foundation has awarded 200 scholarships to more than 175 women. But much more has to be done, as the needs are numerous. This is why the Foundation organizes, in order to better carry out its mission, various activities whose primary goal is to boost its financial capacities. In this section, you will find a brief description of some of the activities that were conducted over the past few years. Internet users are also invited to read our newsletters. These newsletters are published twice a year, in March-April and in December. In addition to reporting on the latest news, we present portraits of our scholarship recipients of the year in progress.

25th ANNIVERSARY OF THE FOUNDATION

THE COLLECTIF DES FONDATIONS QUÉBÉCOISES (Quebec Foundations Coalition)
Since last year, the Lea Roback Foundation is involved in the Collectif des fondations québécoises (Quebec Foundations Coalition). in the course of public consultations on the development of the third Government action plan to fight against poverty and social exclusion, the Foundation signed with the other members of the coalition a position paper «Réduire la pauvreté et les inégalités sociales, un enjeu qui nous interpelle», which was presented to the Government. On the heels of this initiative, we actively participated in a symposium, which took place on April 22, 2015.

Under the presidency of Ms. Lorraine Pagé and in the presence of the event godmother, Ms. Monique Simard, the Lea Roback Foundation celebrated its 20th anniversary on November 3, 2013 at the Corona Theatre in Montreal. This hall, located smack in the heart of the neighbourhood where Lea undertook many valiant struggles, was a fitting site for holding just such an event. 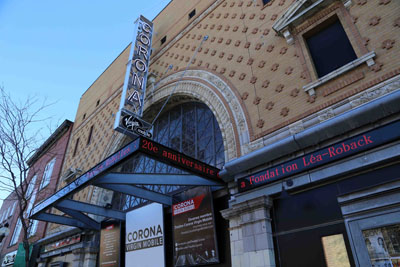 The first part of the show took place in an atmosphere charged with emotion, nurtured by the readings of various texts penned by rebel women, dating from the XVIIIth Century to today. The tone was set at the very outset with the reading of the well-known 1791 Declaration of the Rights of Women and the Female Citizen by Olympe de Gouges. In the foregoing, she declared, amongst other things, “Women have the right to ascend onto the scaffold; they must equally have the right to ascend up onto the rostrum.”

An historical, unforgettable and inspiring text for all those woman who will follow in the footsteps of this pioneer of feminism. Similar inspirational energy filled the room as additional texts by Rosa Luxemburg, George Sand, Mary Woolstonecraft, Eva Circé-Côté, Adrienne Rich and our contemporary Hélène Pedneault were read.
Under the excellent direction of Brigitte Poupart, veteran actresses delivered the words and feelings of these remarkable agitators with great passion and intensity. We graciously applaud Madeleine Péloquin, Eve Landry, Violette Chauveau, Johanna Nutter, Brigitte Poupart, Élisapie and Louisette Dussault who helped us rediscover or discover these women who struggled for social justice. Eve Landry wrote: “Thank you, it was a super experience. Truly inspiring and enriching. All these women are extraordinary!” One participant, referring to these texts, wrote: “They do not cease to inspire us as they are still fresh and relevant today. We should reread them from time to time.” Lorraine Pagé, President of the Foundation, declared: “Yes, we still need to hear and listen to insurgent words to denounce and to change things for the better.” 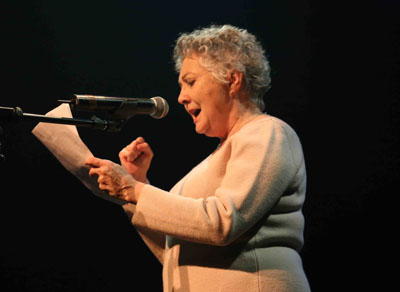 In addition, to celebrate the work that has been done over these past 20 years, the musicians from the group Christine Tassan and the Imposteures gave an exhilarating performance of their gypsy-style jazz music. Thank you Christine Tassan, Lise-Ann Ross, Martine Gaumon and Blanche Bergeron for these moments of pure joy.

The Lea Roback Foundation expresses its deepest gratitude to all the generous people who helped make this event a most memorable one.

VOICES FOR FREEDOM AND JUSTICE: SONGS OF STRUGGLE AND THE MUSIC OF PAUL ROBESON

Last May 5 2012, friends of the Foundation and lovers of good music were invited to attend a benefit concert featuring the well-known singers and musicians Thomas Fox, Andrew Cowan, Kathy Kennedy and her friends. In the lovely Unitarian Church hall, more than a hundred people were treated to Thomas Fox’s splendid voice, accompanied by the blues guitarist Andrew Cowan, singing songs from the repertory of Paul Robeson, the great American singer and activist. Kathy Kennedy and her friends in the Life Stories Choir rounded out this wonderful evening singing songs of struggle from around the world. At the end of the show, everyone present joined together in a stirring rendition of Bread and Roses, the James Oppenheim and Mimi Fariña classic.

The Foundation once again expresses its gratitude to the singers and musicians for their generosity.

On December 4, 2010, we organized an auction to sell the works of art bequeathed to the Foundation by Hélène Pedneault. Many friends of Hélène participated at this activity and bought some of the art, the auction enabled us to collect some $4,000. The remaining art works were sold later to private collectors, friends of the Foundation and at a specialised Auction House.

A Tribute to Hélène Pedneault

AMOURS ET AUTRES SOULÈVEMENTS, an unforgettable evening, was held at the Lion d’Or last March 9, 2010 to pay tribute to Hélène Pedneault, a well-known writer and polemicist, who passed away in December 2008 and bequeathed her worldly belongings to the Lea Roback Foundation.

Warm thanks to everyone.

We will keep in memory an excerpt from a text written by Hélène Pedneault for the World March of Women in 2000, and that was dedicated to Lea Roback.

“We’re not going back, never.
We’re uncompromising, unwavering,
Immortal and from this day
Forward irrepressible.
Our revolution is irreversible.
You can take that to the bank.”

The Lea Roback Research Centre on Social Inequalities and Health, based in Montreal

In October 2004, the Lea Roback Centre on Social Inequalities in Health was created in Montreal. Executive Director Marie-France Raynault, Scientific Director Louise Potvin and a 26-member team of physicians, sociologists, political scientists, demographers and public health specialists are dedicated to understanding why and how social inequalities become health inequalities. The Centre will thus play an influential role with the public, media and decision-makers, indicating courses of action to improve the lot of low-income earners.

According to the directors, the name of the Centre is highly significant. “Lea Roback was actively involved in every area that we now associate with social determinants of health: work, housing, living conditions, etc. For us, she is a symbolic figure and a source of inspiration.” The Lea Roback Foundation and its friends are delighted with the choice.

Located in the offices of Montreal’s department of community health (Direction de la santé publique de Montréal), the Lea Roback Centre is funded by the Institute of Population and Public Health as part of a Canadian Institutes of Health Research strategic initiative to create research development centres.
http://www.centrelearoback.ca/

Since July 1998, the Maison Parent-Roback is housing women’s groups working to improve the lot of women in Québec and around the world.

The Maison Parent-Roback was named as a tribute to Lea Roback and Madeleine Parent, because their lives embody history and the hope for greater social justice.

As a hub of services for Québec organizations defending and promoting women’s rights, the Maison Parent-Roback is also a catalyzing symbol for the women’s movement.

Eager to be involved in this far-reaching work, the Lea Roback Foundation donated a monument to the Maison Parent-Roback. This gift was made possible thanks to Sculptor Armand Vaillancourt’s great generosity and financial support by Fondaction, Bâtirente and the Caisse d’économie solidaire Desjardins. The artist completed the work in November 2003 at the request of the Lea Roback Foundation to commemorate the 100th anniversary of Lea Roback’s birth. This powerful and luminous work, entirely in black and white, contains 36 lights and is surmounted by a flame. Quotations from Lea are inscribed on the base, and the artist’s signature encircles the column “as if I were hugging her…” explained Armand Vaillancourt, a great admirer of Lea.

The informations are on the scholarships page.

Our latest newsletter is now online on the Publications page.